“The best art and writing is almost like an assignment; it is so vibrant that you feel compelled to make something in response. Suddenly it is clear what you have to do. For a brief moment it seems wonderfully easy to live and love and create breathtaking things.”
—Harrell Fletcher and Miranda July, LearningToLoveYouMore.com

Much of Miranda July’s work, from her early videos and performances to her recent film “Me and You and Everyone We Know” and her current collection of short stories, “No One Belongs Here More Than You,” has explored loneliness and isolation and their opposites, belonging and community. Alongside her own output, she has worked to build artistic networks. The most visible of these is the website LearningToLoveYou More.com, which July and fellow artist Harrell Fletcher began as a sort of creativity generation tool.

The website offers a list of assignments from which participating artists, professional and amateur, can choose—ideas such as “Take a flash photo under your bed” and “Draw a scene from a movie that made you cry.” The “reporters” who post their work on LTLYM range from high school kids to serious artists (or both). Though contributors are encouraged to make use of the trivia of personal lives, the results are seldom trivial or banal. The assignment “Photograph a significant outfit” (“Remember exactly what you were wearing during a recent significant moment….Lay out what you were wearing on the floor, as if you are dressing an invisible, flat person”) yields evocative images, with the empty track suits and jeans hauntingly at odds with the importance of the events.

The site is popular in part because it offers its contributors a sense of community. July has said variously that the site allows her to give back to her fans, that it helps her build an audience for work like her own, and simply that she and Fletcher came up with the idea after they confessed to each other that they secretly liked being told what to do. Certainly part of the intense response to July’s work lies in the encouragement she gives to others: her participatory sensibility seems to act as a magnet to the Internet’s charged particles of longing and belonging.

Work from LTLYM has been shown at the Seattle Art Museum and at the Whitney Biennial in New York; now a new show, curated by students from the California College of the Arts in San Francisco, has just opened at MU in Eindhoven. On her way to Eindhoven, Miranda July answered a few questions by e-mail.

How does LTLYM fit in with your own work? Do you get ideas from it? Do you use ideas from your writing in LTLYM?

LTLYM does sometimes inspire my own work, but it does this most often by providing a break from my own reality–i.e., I have a venue where I can discover other people’s perspectives on the, often quite intimate, things that I am interested in. And because I am not personally exposed, it is a project that is easy to throw energy into; I don’t have to worry so much about being judged.

Is there a logic behind your assignments? What are you trying to get the reporters to do?

Harrell and I have come up with the assignments every few months over the last five years, so they reflect us over that span of time. I think we realized early on that reports that forced people to engage with other people—friends, family or total strangers—were more interesting. Right now we are writing some assignments that are slightly more political, in a personal way. [Recent assignments include “Make an educational public plaque” and “Interview someone who has experienced war.”]

What surprises has the project yielded? What assignments have made people the most and least enthusiastic?

I personally was surprised that the “write your life story in less than a day” assignment was done so diligently, and that the results are rarely boring. That’s what you realize again and again: people are interesting. But often, and I’m speaking for myself here, we don’t see the most interesting things about ourselves. We get in a rut of thinking: this is who I am. It can help to be told to reveal something that you take for granted. For example: “Make an exhibition of your parents’ art”—by which we mean the art you grew up with, be it actual paintings, or knick-knacks, whatever qualified as art in your mind, as a child. We ask people to write what they think of these images that are so familiar they almost don’t see them. And it is fascinating to read.

How actively were the reporters involved in the exhibition?

The curators (the students) had to hunt down the artists and get permission to use their work, and in some cases have the work sent to the museum. I think one or two artists hadn’t kept the originals and actually re-made the works.

A very different question: When you were here in June, reading at the John Adams Institute, the moderator, and also at least one reviewer of your book, seemed to see only a sort of hapless side to your persona and assume that that was you, or all of you. Although you spoke about hard work, he seemed to think that your career had happened more or less by accident. What’s that about?

Well, I think people sometimes get confused between the fictional characters and me. But in defense of my characters, they are rarely hapless, and actually almost always do something unexpectedly daring—and I would like to think they take after me in this!

Also, perhaps because I didn’t go to school for arts, and don’t cite any training or mentors, people think that it was not cons 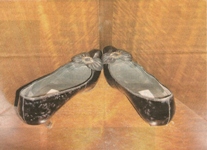 cious. But school actually made me feel guilty, because it took time away from my own work, so I dropped out. But not in a hapless way. I was a very determined college drop-out.

Is there any particular illustration material you would like us to use?

All I can think of are these pictures I took last time I was here, in my hotel in Amsterdam. I bought this pair of shoes at Zipper, but then I realized they didn’t really fit. So I left them in the hotel room. (They were really cheap.) I put them like this and then shut the cabinet, hoping that some guest with feet slightly smaller than mine would open it one day.