Jonathan Franzen is a little like Times Square, the Eiffel Tower, or a Dutch windmill. If you’re a local, you can protest all you want that he’s not the only sight worth seeing, that you know other, less touristy spots, that there’s more to our great country than this one monument that’s on all the postcards. The foreign visitors won’t be satisfied until they’ve been there. 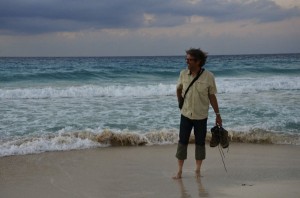 There’s no getting around it: Franzen is a place of interest. His 2001 novel “The Corrections,” about the troubles of three adult children heading home to spend Christmas with their parents, was both a literary success and a bestseller. His next novel, “Freedom” (2010), was even more ambitious, dealing not only with an unhappy marriage but with environmental destruction, the Iraq War, the damaging effects of moral compromise, and the burden of too much liberty. “Freedom” was acclaimed for its ironic yet compelling style, its canny interpretation of the zeitgeist, the “majestic sweep” of its narrative. In Trouw, Rob Schouten praised Franzen’s “panoramic perspective” and his ability to interpret the condition humaine.

Reviewers and interviewers began to speak of a “Great American Novel.” Franzen became the first living writer in a decade to appear on the cover of Time magazine. At a time of postmodern experiment and declining interest in fiction, Franzen seemed like literature’s best hope of turning the tide.

Still, readers in America and the Netherlands are awaiting his new novel, “Purity,” with guarded anticipation. While critics prepare to discuss the book’s merits and reappraise Franzen’s role in the cultural conversation, a larger question keeps getting in the way. Is the figure of the “Great Writer” still relevant at all?

Franzen doesn’t fit the image of the literary alpha male. He’s not an old-fashioned, self-regarding titan like Norman Mailer or the Dutch “Big Three.” In interviews he’s more awkward than authoritative: part arrogant, part apologetic, often saying more than he means to. Last week in a Guardian interview he commented that he and his partner had thought briefly of adopting a child, partly to get in touch with young people. Clearly this was just one of thousands of thoughts that arise in Franzen’s fertile brain and occasionally escape through his mouth, but within hours his desire to adopt an “Iraqi war orphan,” torn from its self-mocking context, was being sneered at on social media while he was criticized for insensitivity. Even when he’s not saying something clumsy, his stature makes him a target for attacks, some of them from writers frustrated by the disparity in status between literary women and men. His clashes with the novelist Jennifer Weiner, who is annoyed that her books are classed as “women’s fiction” while his are “literature,” are legendary.

All this fuss and feuding masks another issue: the lack of a common voice in American letters. Maybe there never was one. The American literary scene is has long been relatively diverse, or at any rate more scattered, geographically, thematically, and demographically, than the more concentrated worlds of Amsterdam and London. The nearer you approach it, the wider the range of voices. Even Updike and Roth, who from a distance seem to tower over the rest, in America are just two buildings on a skyline.

One explanation for Franzen’s preeminence is that he’s still willing to defend the novel as a vital part of the culture. He believes there’s a need for books like “Freedom,” big sweeping social novels about the middle classes, politics, the family, love, how we give life meaning. In a 1996 essay in Harper’s magazine, full of youthful ambition and righteousness, he wrote that he longed for a time, lost between the rise of television and the death of serious reading, when novels had an impact on Western culture and spoke to the American soul in times of crisis. He wrote that he still had faith in the socially engaged novel in the mold of Dickens and Tolstoy, the novel of manners in the broadest sense, fiction that deals with social and familial bonds and asks: How do we live? How should we behave?

This type of novel has a particular appeal for Dutch readers. While Americans are susceptible to dreams, adventures and theatrics, the Dutch, it seems to me, are deeply concerned with questions of social and personal conscience. In a country where discussing moral choices comes so naturally, the dilemmas Franzen writes about in “Freedom” take on an extra appeal. The theme of too much freedom resonates even more for a generation that broke away from their parents’ bourgeois morality and let their children run wild, but never gave up their underlying faith in ethics and family ties.

Franzen has told us a lot about his own family, especially in the autobiographical pieces collected in “The Discomfort Zone” (2006). He was born in 1959, the youngest child of Scandinavian-American parents thoroughly devoted to the ideal of fitting in. Like so many people in the 1950s, Earl and Irene Franzen had escaped from unhappy Depression-era childhoods and sought contentment in “normal life.” The family lived in Webster Groves, Missouri, a prosperous, largely white suburb of St. Louis, the mirror image of troubled Ferguson across town. “I grew up in the middle of the country in the middle of the golden age of the American middle class,” Franzen states, and in his career he’s struggled to understand his inexplicable discontent with the pleasant middle—the impossibility, for his whole generation, of embracing their parents’ values. “My mother seemed to me hideously conformist and hopelessly obsessed with money and appearances; my father seemed to me allergic to every kind of fun,” he writes, looking back on himself as a confused teenager. “I’d been their late, happy child, and now there was nothing I wanted more than to get away from them.”

He was burdened by a powerful intellect, a deep self-consciousness, and a strong sense of social justice. All these qualities were probably intensified by his four years at Swarthmore College, a liberal arts college that combines high academic standards with progressive inquiry and is better known for training professors than for nurturing artistic talent. His parents wouldn’t let him study English—they were hoping for engineering—so he found his way to literature by majoring in German. He graduated in 1981, married a fellow student in 1982, and published his first novel, “The Twenty-seventh City,” in 1988, when he was 29. The unhappiness of his ten-year marriage, and the pain of the breakup, color the mood of “Freedom.”

In essays and interviews he’s revealed a number of quirks about himself, often involving his restlessness, his shyness, his obsessive wrestling with the written word. When he was working on “The Corrections,” the book that became his breakthrough, he was so determined to concentrate that he wrote wearing earplugs and a blindfold. (“You can always find the ‘home’ keys on your computer,” he said in the New York Times. “They have little raised bumps.”) He still works on a laptop with no wi-fi card, to avoid distraction, and refuses to use any kind of social media. He told the Guardian: “It’s doubtful that anyone with an internet connection at his workplace is writing good fiction.”

Having left the mainstream Midwest, he has found it difficult to feel at home anywhere else. According to recent interviews, he has now given up New York to live full-time in a modest house in the hills overlooking the hippyish beach community of Santa Cruz, California. He lives there with Kathryn Chetkovich, a writer who may be best known for her 2003 essay “Envy,” about how difficult it can be for a writer to live with another, more famous author. He and the late David Foster Wallace, who were friends, agreed that writing and reading were most of all “a way out of loneliness.”

A common critical objection to his writing is that it’s too digressive. “Franzen doesn’t always know when to stop,” Joost Zwagerman observed in an otherwise enthusiastic review of “Freedom” in Vrij Nederland. “You catch yourself wanting to skip over whole sections.” A more serious argument is that, despite the sweeping promise of titles like “Freedom” and “Purity,” he can’t always give significance to his subject matter. He seeks great truths in small incidents and ordinary people, but often they remain small and ordinary; in speaking for the bland middle of America, he isn’t able to raise it above its blandness. On some level Franzen doesn’t seem convinced that ten cents of human experience can ever become a quarter’s worth of meaning.

But the real problem with the hopes pinned on Franzen is that they’re absurd. At a reading in Amsterdam in 2010, Franzen told moderator Jan Donkers that he hated being asked about the Great American Novel; elsewhere he’s made it clear that he doesn’t believe in it. Nor, in their hearts, do most critics and readers. Not only is American literature diverse, the few remaining serious readers of fiction don’t seem to be looking for new Great Writers. As Joost de Vries wrote recently in De Groene Amsterdammer: “Writers don’t piss the farthest anymore.” The pissing contest has moved on.

In fact the great themes of Franzen’s writing are all about this change. No matter how big the writer’s ego, there’s no hill to play king of anymore, no literary monument. There’s only the glass mountain of the post-‘normal’ America.

Trouw, August 28, 2015. Trouw wanted a profile of Jonathan Franzen to run as the lead story in the arts section just before “Purity” came out. So they asked their resident Franzen skeptic—although I found that the more I argued against seeing him as one of the Greats, the easier it was to like his writing.

The photo is by Watter Al Bahry.